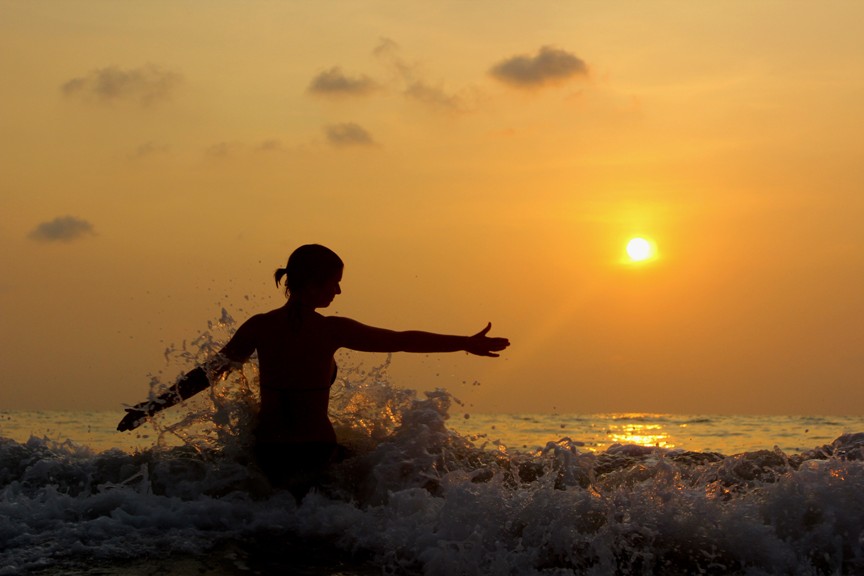 Booking Phuket is fine and good and simple—it’s all about the tourist, and the tourist needs infrastructure: airports and roads, buses and AC, toilets and English and dozens of dozens of options for all the different budgets and tastes and style. Go here and you get choices. You travel easy.

Khao Lak used to be something like that, I’m told. But nine and a half years ago, a wall of water taller than a dump truck and heavier than a freight train exploded across the shallow sweeps of perfect beaches and smashed headlong into the resorts and condos and restaurants and shops and pubs. It ripped that infrastructure apart at its seams and yanked out all the stuffing. It strewed the splintered boards and crumbling drywall, the pipes and stones and coconut palms, the shattered tile and bamboo poles and police boats miles inland, and left thick, soupy muck in its wake.

Mangled, muddy bodies of both tourists and locals rounded out the flotsam—not by the tens or even the hundreds, but the thousands. Meanwhile, dehydration, pathogens, and trauma settled in for the survivors.

I chose this place.

Andy was skeptical–could the beaches really be better than Phi Phi? Could the waters compare to Phuket? It’s kind of out of the way…

“She’s perfect,” I said. The crowds aren’t there, so you book a four-star resort for the price of a tiny two-star in the tourist hubs. The golden beaches stretch for literally miles on end; the water wafts in, warm smooth, and were it not for a certain Tsunami, this place might be neck-and-neck with Phuket herself.

I meant the Surin islands—a fistful of pearls lying off the coast, an untouched bubble of marine and jungle ecology fused into the tiniest gems of real estate that can house them. The National Park welcomes primitive camping and guided exploration of the chaste and vibrant wilderness. Let’s snorkel and camp, I said. Let’s get out of the motorbikes and tuk-tuks and wi-fis and Buddhas. I craved a place where nothing would speak to me save the gentle sea cradling my masked face in its soft palm, my fins slowly swaying me past coral more wondrous than any sci-fi writer has ever dared to dream up.

I didn’t get to go, though.   Too much idiot tax. Too much rushing wild through Bangkok and then Phi Phi kept me from shelling out for that speedboat.

But I’m not sorry for it. I traded the expense and the rush, you see, for precious rest and quality catch-up with my bride.

Too often I work myself late into the night; too often I rise early for a few extra moments typing out these tiny remembrances for myself as much as for anyone else. Too often my eyes go bloodshot wanting sleep, and caffeine jerks me through another stack of essays, through another morning’s typing, through one more minute cheating sleep. I limp through to vacations, and then go crazy with the fresh scenes and ambitious plans, and then stretch each day an hour longer, an hour earlier, a bit more basking in the sparkle of the new scene—until I drag myself back home on a red-eye flight, hobble through the door and toss the bags on the floor, and crash a few hours before waking early to try it all again.

Not this time, I said. This time my sole ambition is to sate myself with sleep. My only goal is to soak in as much of paradise as two more days allow: to nap in the shade of palms and the music of the waves, to stroll through moonlit gardens and sunsets in the surf, to hold hands instead of cameras and backpacks and maps, to glut ourselves on rest and nothing until energy amasses and I come back home electric with the stored-up charge, bouncing like the guy on the bench who can’t wait to get back in the game, like the puppy kept in the kennel all day.

We couldn’t have picked a better spot for such a project.

Khao Lak’s water was as blue as any on the planet, and warmer than my showers in Jakarta. The sea floor stretched so flat and so smooth underfoot, I could have sworn I was walking across a giant pool table. The long crescent of sand was sparsely peopled and hushed enough to finally, finally hear your own thoughts whisper gentle words to one another.

Days found us lounging in shade and punctuating those moments with dips in the sea. Afternoons coaxed us from the chair to hold each other close in the slow break of tender waves. And nightfall found us strolling hand-in-hand through the golden sands deciding on which beachside stall’s Tom Kha soup looked most inviting. Ambling back under the stars, we made our way to the oversized bathtub in a resort room larger than our entire apartment back home.

That’s right: I finally learned to relax on a vacation.

Thanks to Khao Lak.

It’s true—not many of the fellow guests were in our age bracket. It’s also true that most of them were speaking German and Russian. It’s true that some might say Khao Lak was a retirement getaway for the snowbirders from far north. What does all that mean? Well, it means is that those guys have found a great destination at a great price—it lacks the flash and pizzazz of Phuket, granted, but it also lacks the noise and the traffic, the hype and the glitzy façade. Khao Lak is sincere and humble. What you see is what you get.

And what you see is pretty amazing.

A few days here sloughed off our tensions of re-entry permits and curriculum and professional pressures. Maybe it’s the bright blue waters and steady rhythm of their waves, maybe it’s the palm-rustle quiet and the saltwater breeze, maybe it’s flying free of society a few days—or maybe it’s holding the love of your life in the sunset ebb and flow of what was once the graveyard waters for so many thousands—but Khao Lak fosters reflection.

On a warm bus back to the big city and cold airport, between half-naps and roadsigns posted in a mesmerizing alphabet I could no way understand, I wondered how this bus, on this road, in this corner of the globe was different than any other bus any other place. A young mother drifted a pigtailed daughter to sleep, a wrinkled old man tugged at his faded hat, and the teenage ticket-taker, who I still wasn’t sure had sold me a ticket to the airport of the bus station, kept texting and texting.

It’s the same bus all the world over, and yet no bus would ever be the same. It’s the same winding journey down the highway current, past the whirls and eddies of lives I’d never know and never understand. It could’ve been a bus in Sri Lanka or Mongolia or Murphysboro, and would it ever have mattered? Protests were raging in the capitol, people outside were scrapping for cash, tourists sought vainly for moments of bliss as if beauty alone could provide it, and just a few meters away glimmered the waters that one sunny morning came crashing so murderously to shore.

And still the yellow afternoon sun filtered through the dusty windows, and the engine droned steadily on, and I nodded off again, wishing for nothing more than home.

It was, to be honest, a Lotus-Eater moment, when all life outside the hazy half-wake of the sleepy bus was so many billows and so much turmoil, so many storms to row against in the confusion of the wide sea. It was a moment that called for nothing more than a dreamy escape from all responsibility, from all toil, from all life.

Fortunately, though, I had my wife beside me. She’s the one who woke me, who sent me off to work once more: to the front of the bus yet again, to asked the teen in denim and Chuck Taylors whether we were headed for the airport or the bus station. Who knows what Lotus dreams I’d have had otherwise.

That’s the story of Khao Lak, though: a haven, a dreamy beach mist, a clock-melting, eye-squinting moment of warmth slipping past your weary limbs. But only a moment. Know that it won’t last forever. Know you’ll have to face those waves again.

View all posts by piledlife